Of particular interest is Steve Solomon's book, Gardening When It Counts, in which he describes breaking new, fallow or previously non-agricultural ground into fertile and productive family gardens using a shovel, hoe and rake. 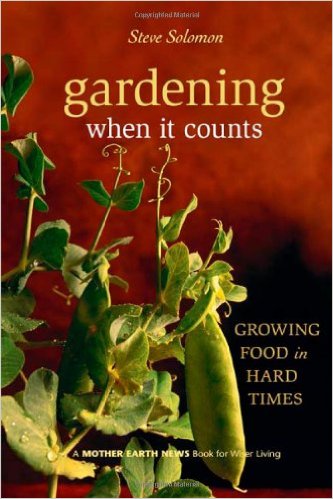 Currently popular intensive vegetable gardening methods are largely inappropriate to this new circumstance. Crowded raised beds require high inputs of water, fertility and organic matter, and demand large amounts of human time and effort. But, except for labor, these inputs depend on the price of oil. Prior to the 1970s, North American home food growing used more land with less labor, with wider plant spacing, with less or no irrigation, and all done with sharp hand tools. But these sustainable systems have been largely forgotten. Gardening When It Counts helps readers rediscover traditional low-input gardening methods to produce healthy food.

Designed for readers with no experience and applicable to most areas in the English-speaking world except the tropics and hot deserts, this book shows that any family with access to 3-5,000 sq. ft. of garden land can halve their food costs using a growing system requiring just the odd bucketful of household waste water, perhaps two hundred dollars worth of hand tools, and about the same amount spent on supplies — working an average of two hours a day during the growing season. 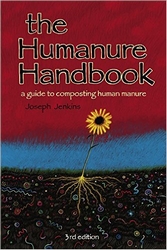 The Humanure Handbook: A Guide to Composting Human Manure, Third Edition 3rd This is the 3rd edition of a self-published book. No respectable publisher would touch it with a ten foot shovel. The 1st edition of Humanure was published in 1994 with a print run of 660 copies, which the author fully expected would last the rest of his life. Now, 22 years later, the book has sold over 60,000 copies in at least 59 countries worldwide and has been published in numerous foreign editions on four continents. The 2nd Edition was a 2000 Independent Publisher Outstanding Book of the Year, deemed the book "Most Likely to Save the Planet," a 2000 Finalist in ForeWord Magazine's Book of the Year Awards, and a Finalist in the 2000 Benjamin Franklin Awards for Excellence in Publishing. It was an Amazon.com #1 bestseller in its category for several years, and has been reviewed by Mother Earth News, Whole Earth Review, Countryside Journal, The Journal of Environmental Quality, Natural Health, and many other popular print media. It has been talked about on NPR, BBC, CBC, Howard Stern, The Wall Street Journal, Playboy Magazine, Organic Gardening Magazine and many other national and international venues.

Tribulation & Endurance - What Do You Mean?

What Can I Eat?

Gardening When It Counts